We are pleased to welcome Jim Moortgat to the High Point staff! Jim started in February 2022. His focus will be developing the new “Home School Prep” and  “Home School Elite” programs. He will also be involved in the High Performance Junior program.

With over twenty years of collegiate tennis coaching experience, Jim has coached numerous All-Americans, won countless conference titles and Coach of the Year honors (National and Regional). He has four National collegiate titles and has coached both the men’s and women’s teams at schools such as Boise State University, University of Mobile and Samford University.

Jim travelled internationally for five years as a USTA National Player Development Coach, working with world-ranked juniors who became Grand Slam winners and several of whom became top 20 players in the world.  He has individually coached several touring players with ranking as high as Top 60 in the world as well as coaching a Wimbledon Doubles Champion.

Prior to joining our staff, Jim was the Co-Owner & Director of TAG Training Ground in Melissa, TX. He was also a USTA High Performance Coach and Co-Director of the TBarM Junior Academy. 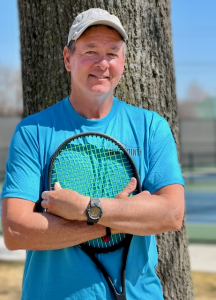 Jim believes in building a culture where players can train and learn how to better themselves as people and athletes through tennis.  To achieve this, his training methodology includes teaching respect, responsibility, hardwork and discipline as the basis for becoming a better player and person.

Jim is married to the former Jennifer Roberts. He considers his greatest achievement to be his two children, daughter Camryn Marie and son Caden Smylie.

Jim is available for private lessons – with a focus on junior players who compete in tournaments and want to improve their IPTA/USTA rating.