John was born and raised in “Aggie Country” Bryan, TX  where he played as a four-year letterman for Bryan High School.  He received a two-year tennis scholarship at Blinn Junior College in Brenham, Texas and then transferred to Texas State University earning a B.S. in Kinesiology with a minor in Psychology.

He has taught tennis for over 35 years and has been a USPTA Certified Professional I since 1990. Locally, John worked for over two years at Fretz Tennis Center with Jack Newman, and at High Point Tennis Center as a Junior Head Pro. He continued as a member of High Point’s part-time staff until 2007. John has also worked part-time at Bent Tree Country Club, El Dorado Country Club and Lifetime Fitness.

In public education, John was head coached for Clark High School in Plano from 1996-2007, and Head Varsity Coach at Plano East Senior High School 2016-2022, when he retired. Throughout his career, he has worked with numerous Tennis Competitors of Dallas (TCD) teams, top ranked junior players, and individuals at the professional level.​ Ultimately, John enjoys working with adults & juniors of all levels and helping each player reach their goals.​ 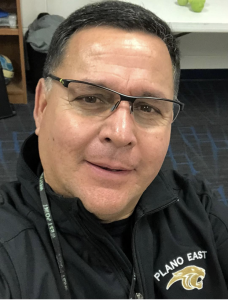 Outside of work, John enjoyed competing at the 5.0 tennis level for many years. These days, he likes to play ping-pong and swing the golf club “for kicks.”

John says that he is excited to be back working at High Point with top coaches such as Jim Moortgat, Kriszta Kovacs, Dencil Johnson, and Judy Adams, to name a few, ~ “who take their profession seriously” and who “give so much of themselves to develop competitive tennis players.”

He looks forward to the meeting all the tennis players that make High Point Tennis Center the best facility in North Texas.