Clint is a born and raised Texan. He was captain of his tennis team at Plano Senior High and one of the top ranked juniors in Texas. He attended the University of Texas at Austin and earned a Bachelor of Arts in Economics.Upon graduation, Clint was hired as Director at the Four Seasons Tennis & Health Club in Sherman, TX and worked there from 2006-07. He became a Sales Representative for Prince Sports Group in 2007 and worked for them until 2011. Since then, he has been the District Sales Manager for HEAD Penn Racquet Sports in North Texas and Oklahoma. He is also a Tennis Professional at High Point. 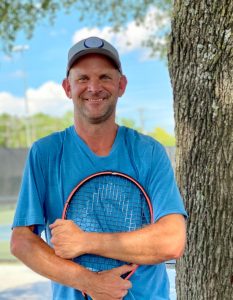 Clint is Volunteer Chair for the Red Balloon Children Helping Children Tennis Tournament, High Point’s signature charity. As Chair, he oversees event logistics. Tournament players and their families raise money to support the Children’s Health Pauline Allen Gill Center for Cancer and Blood Disorders. Started in 1990, the tournament has raised over $3 million dollars. He received the USPTA “Texas Lessons for Life” Award in 2018 and 2019 for his involvement with the tournament. Clint is an active tennis player and has 5.0 NTRP Rating. He and his wife Kathryn have a three-year old son named Grayson Wyatt.